VC 3.0 and the Democratization of Venture Capital 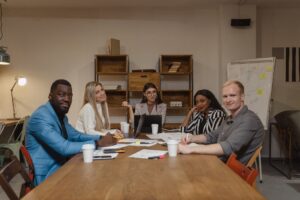 Steve Case, founder of AOL, and early evangelist of ‘rise of the rest’ cities, posited recently in an interview that we are now living in the third wave of the Internet. “First-wave companies like AOL were building the on-ramps,” argued Steve. “The second wave was building apps and software on top of the internet–think Facebook. This third wave is when the internet meets the real world. And it’s healtcare, it’s food and agriculture. These are big parts of our economy, and the domain expertise in those sectors and the partnerships you need to form to be successful in those sectors are often in the middle of the country, not on the coasts.”

For our part, Catapult has been at the forefront of advocating the importance of founders and venture investors to ‘think outside the Silicon Valley box.’ Early on we offered the proposition that a “decoupling of geography and capital” was afoot and being accelerated by an order of magnitude by the pandemic. This notion of a global decoupling of capital and geography — and, with it, the waning importance of geography as a competitive moat for capital and talent — is now being embraced by many fellow investors, most notably Endeavor’s Allen Taylor in his prolific writings on cross-border investing.

The changes wrought by this ‘Third wave of the Internet” and the idea that VC has become more distributed than ever have scrambled the playing field for startups and venture investors alike and, with it, rewritten the rules for VC going forward.

The “Third Wave” construct is a convenient prism in which to examine how VC is being altered by these powerful forces because, in many ways, venture capital is experiencing a third wave of its own. The changes somewhat parallel the shift Steve Case alluded to when he discussed how the partnerships, talent and innovations necessary for Internet 3.0 were now in geographies outside the traditional tech centers of Silicon Valley and Boston where, to date, the vast majority of venture dollars have been deployed and many venture funds have been domiciled historically.

To tug on this analogy a bit further, we’d argue that VC 1.0 was the world defined by the ‘Sand Hill Road’ venture archetype which persisted from the 1960s to the early 2000s. Firms of that genre were heavily (although not exclusively) male, white and Ivy League-pedrigreed. While some venture funds of the VC 1.0 model were initially formed and led by former technology founders and executives, just as many were run by those from investment banking and management consulting.

The firms themselves often looked like and were structured as law firms with Partners, Principals, Associates and the attendant hierarchical relationships that those titles would imply. Even the names of the firms themselves supported the inference — Weiss, Peck & Greer; Mohr, Davidow; and Kleiner, Perkins, Caufield & Byers.

Attrition was low, Partners often worked their way up from the Associate ranks, and the incidences of a Partner leaving his or her firm to join a rival outfit was exceedingly rare.

VC 1.0 began to exhibit cracks after the tech bubble popped in early 2000 and, with it, the beginning of what would become VC 2.0 came into view. By 2003, the venture capital asset class had experienced a brutal three year correction since the peak of the dotcom-fueled frenzy. Many venture funds were thinning their ranks; others, even those who became synonymous with the biggest successes and flameouts of the dotcom era, stopped investing in Consumer Internet companies entirely. (Pets.com and Napster investor Hummer Winblad comes to mind here.)

Partners were being shown the door or otherwise transitioning out, especially if those Partners came from domains like Consumer Internet or Telecom that were suddenly out of favor in the post-bubble era.

Just as importantly, another dynamic was in evidence by the early 2000s that had arguably an even greater impact on the emergence of VC 2.0 firms. In the late 1990s many billions were plowed into ill-fated telecom and infrastructure companies. Many of those companies failed in spectacular fashion, but not before laying the pipes that would vastly improve internet bandwidth and reliability for generations to come. In short, many of those companies (and their capital) disappeared but the improved infrastructure remained. A new crop of investors saw the immediate impact of this on startup creation and moved to take advantage.

By the mid-2000s, all this enhanced bandwidth and infrastructure — and the increasing prominence of early SaaS technologies and their offshoots and acronyms (ASPs, ISPs, et al) — meant startups could spin up fast and build and launch products for a fraction of what it would have cost only a few years earlier. This meant venture dollars could go a lot farther. (No more servers to buy!) What might have cost a startup $5–10mm in venture capital to get to a certain level of traction in 1997 might now be accomplished with only $500k by 2003. This was an earthquake in the making.

In short order, startup founders who achieved some liquidity and Partners who were pushed out of their VC funds or had left of their own volition began forming their own funds. Startups were much more capital efficient now, they’d argue. These “next gen” VC firms did not need massive investment vehicles to be relevant, they’d argue. They could write small checks, they could take a more collaborative approach with founders, they could remove some of the clubbiness and opacity around traditional venture capital that had come to epitomize VC 1.0 funds, and they could provide a better user experience for founders. LPs agreed.

By the mid-2000s a crop of ‘young turk’ VC firms were actively deploying capital in the asset class and winning hotly competitive deals. Firms like First Round Capital, Shasta Ventures, and True Ventures are examples of this generation of VC 2.0 funds, but there are many others. By the late 2000s, as the tech bust faded from consciousness and as big exits began occurring — Google’s $1.6Bn acquisition of YouTube was a watershed event during this period — the Web 2.0 era had arrived and, with it, the VC 2.0 generation of firms. Typically, these firms were younger, leaner and more diverse.

By 2010, an even newer generation of VC fund was beginning to take shape. While the VC 2.0 generation funds were smaller, they were still typically comprised of teams working collaboratively. The idea of a ‘solo GP’ was not well understood. While angel investors in tech had been around for decades, few had institutionalized what they were doing to where they were accepting outside capital and running a traditional venture fund. Investors like Chris Sacca (Lowercase Capital), Michael Dearing (Harrison Metal), Jeff Clavier (Uncork, fka SoftTechVC), and Steve Anderson (Baseline), however, started investing as ‘Super Angels’ and then, on the back of early successes, went on to raise standalone funds.

The returns generated by many of these Super-Angels-turned-full-time-solo-GPs proved that small funds writing small checks in very early stage companies could be highly lucrative. Case in point: more than a decade later, Chris Sacca’s first fund is still widely considered the best performing VC fund ever — thanks to his early bets in Twitter and Uber and his then-unconventional strategy of amassing large positions in those companies by acquiring shares from other investors who either lost faith or otherwise wanted early liquidity.

Those early solo GP funds are now part of the VC firmament and the investors behind them are considered some of the most respected players active today. The legacy of these pioneering solo GP firms is that they laid the groundwork for literally hundreds of VC 3.0 generation funds that have spun up in the past decade because their successes proved to LPs that ultra lean, small funds could have enormous impact in venture.

This brief historical retrospective on VC brings us up to the present moment where we have hundreds of new platforms led by ethnically diverse investors taking novel, hybrid approaches to VC — solo GPs, nano funds, rolling funds, angel syndicates, and so forth. While there are still many barriers to remove, the venture capital asset class is now more diverse and better represented than ever before.

But this movement towards greater diversity, representation and — dare I say it, democratization — was not fueled by philanthropy or virtue signaling. This is good and sound business.

Startup creation and ideation is now global. Startups are spinning up in every corner of the world— not just in Silicon Valley, or Boston or a handful of other obvious tech hubs. Founders are global and increasingly diverse, as are the markets and the consumers that their products and services target. This means venture, too, must be global. And the investors behind next-gen venture platforms must have a global perspective and must more clearly mirror the startup teams in which these firms invest. Again, this is not because it might make us feel good to argue this case for diversity; it’s simply good business.

Tech products today are now embraced and championed across the world. Moreover, the ‘rise of the rest cities’ that Steve Case champions so well — both in the US and beyond — are still playing catch-up to Silicon Valley and the coasts in terms of tech adoption. So these “Third wave of the Internet” geographies is also where the growth is. Indeed, examine any industry study of the torrid rate of growth of smart phones in developing Asia or Africa and you’ll know what I’m on about.

I’m enormously bullish on this new generation of emerging managers, not simply because many are former startup founders and have empathy for the startup journey, but because more diverse backgrounds and perspectives on VC investment committees means future tech products and services will more directly map what consumers and enterprises around the world want and what will solve their problems. As more VC partnerships begin to look more like the startups in which they invest the better the future looks for tech and for the world. The democratization of VC is here, it’s multi-ethnic, it’s gender diverse, it’s embracing hybrid fund structures that reflect the times, it’s thinking outside the Silicon Valley box, and it’s the future of venture capital. Somewhere, Steve Case is smiling.